Qatar has once again become the largest exporter of LNG - more than 10.4 bcm

n April, Qatar became the world's largest exporter of LNG - more than 7.5 million tons (or 10.3 bcm) of LNG, 19% more than in March. This was reported by Bloomberg. Qatar's LNG exports fell last month due to terminal maintenance.

Instead, LNG exports from the United States fell by 8% in April to 7.1 million tons of LNG (9.8 bcm). This is due to declining demand for natural gas with the end of the heating season in the Northern Hemisphere. At the end of the winter, the cold weather, along with Europe's desire to reduce its dependence on Russian gas amid the war, boosted demand for LNG.

"Looking ahead, the United States and Qatar are expected to compete for dominance in the global LNG market," Bloomberg reported.

After the completion of the Calcasieu Pass export terminal in Louisiana later this year, the United States is expected to reach a peak LNG production capacity of 13.9 billion cubic feet (0.4 bcm) of natural gas per day. Meanwhile, Qatar is planning a large-scale export project to be launched in the late 2020s, which could strengthen its position as a major fuel supplier.

Traditionally, Australia closes the top three in LNG exports - 6.5 million tons of LNG (9 bcm) in April, 1.5% less than in March. 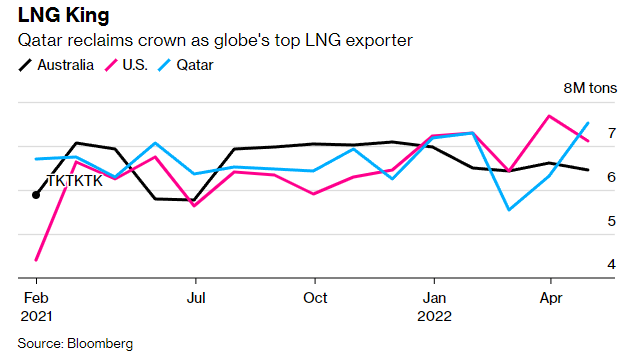 All events
News
Ruble accounts in Gazprombank violates sanctions, - the European Commission
Finnish company Gasum will not pay for gas in rubles and will resort to arbitration
European Commission will offer companies a way to pay for Russian gas that does not violate sanctions
Polish PGNiG has signed a long-term contract for the supply of LNG with American Sempra
Gas reserves in Luhansk region remain for two months
Spain and Portugal limit gas prices for electricity generation to an average of 48.80 €/MWh
Japan's largest oil company Eneos is stopping buying Russian oil
Gazprom's method of paying for gas in rubles violates sanctions - a new statement from the European Commission
Lukoil buys Russian Shell assets
Gazprom Germania has stopped receiving Russian gas
Futures on natural gas in Europe soared by 15%, up to 107.00 €/MWh
Ruscist militants caused halt of Russian gas transit to Europe via Sokhranivka gas interconnector
Indian companies buy Russian LNG on the spot at a discount
Gazprom assures European customers about the possibility of paying for gas without violating sanctions
Unfeasibility of the new PSO in the gas market - APE
Qatar has once again become the largest exporter of LNG - more than 10.4 bcm
More news