On November 11, 2021, Gazprom will again pump 109 mcm of natural gas via Ukraine to Europe

On November 11, 2021, Russia's Gazprom plans to transmit 109 mcm of natural gas to Europe via the Ukrainian GTS for the second day in a row, with the maximum possible capacity under the long-term contract (40 bcm to be transmitted annually. This became known from the results of daily auctions on the RBP Platform.

This is the highest value since the end of September 2021. Thus, Gazprom, as in the previous day, purchased at auction an additional 19.17 mcm out of the proposed 85.65 mcm transit gas interconnection capacities at the Velke Kapusany point (on the border of Ukraine and Slovakia).

Gas will come from Russia through the Sudzhu (76.9 mcm) and Sokhranivka (32.4 mcm) interstate gas interconnection points. Most of the gas will beb transmitted to Slovakia ( 89 mcm), and the remaining volumes to Poland and Moldova (by about 10 mcm in each direction).

Instead, at Mallnow (Polish-German border), the company did not purchase daily capacity for the transit on November 11, 2021. 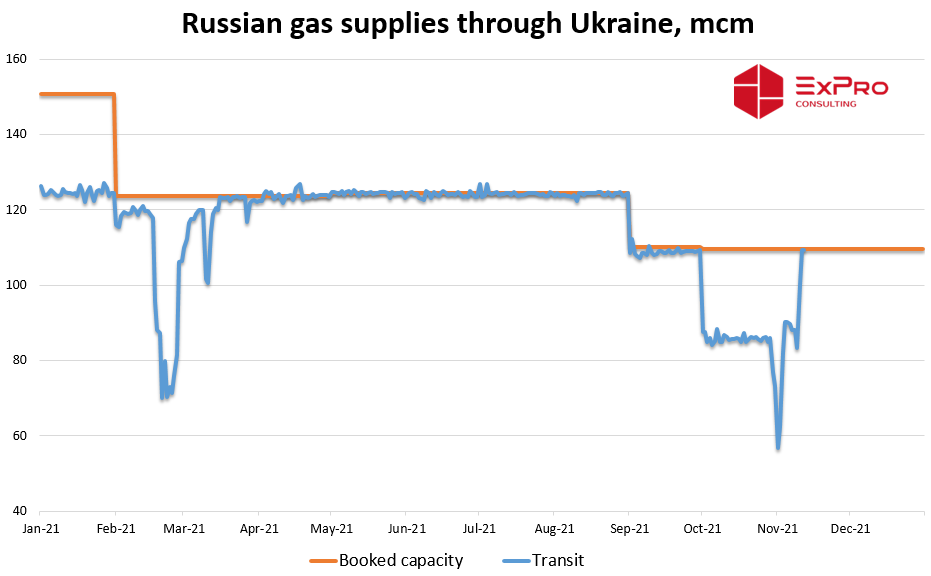 All events
News
New historical record for gas exports from Ukraine - more than 560 mcm in November
The flow rate of the new well drilled by Naftogaz at the Yablunivske field amounted to 365 tcm per day
Oleksandr Scherba became the Chief Adviser on International Activities to Naftogaz’s CEO
Centrenergo offered electricity for April-June 2022
Energoatom will operate in 15 NPP units from February 1 to 15, 2022, prioir and after it - in14 NPP units at t
Centerenergo will import 1.5 million tons of coal from the United States, Kazakhstan, Poland and Australia
SPE Subsurface Conference was held in Kyiv
DTEK Naftogaz together with Weatherford used downhole video cameras for the first time in Ukraine
JKX Shareholders support decision of Delisting the Company on the London Stock Exchange
Energoatom has connected the ЗА4 ZNPP power unit to the power system
SSGSU cancelled the order on suspension of the mineral rights for the Plativske gas condensate field
Ukrgasvydobuvannya saved UAH 340 million on two tenders for the purchase of the pipe
UGV could save UAH 240 million on purchase of pipes for gas production
Ukrburgaz fulfils drilling plan for 2021
Oschadbank returned UAH 3.04 billion to accounts Guaranteed Buyer at the request of the new management
Smart Energy spudded a new well in Kharkiv oblast
More news