Natural gas prices in Europe exceeded $2,000/tcm for the first time since the beginning of March

Natural gas futures prices of Front Month (August-booked resource) on the Dutch TTF during trading on July 26 exceeded $2,000/tcm for the first time since the beginning of March. This is evidenced by trading data.

So, on Tuesday, the prices on the TTF reached €192,895/MWh. When conversion, the price is more than 91,000 UAH/tcm (including VAT), which is three times higher than the price of natural gas in Ukraine (according to ExPro data). 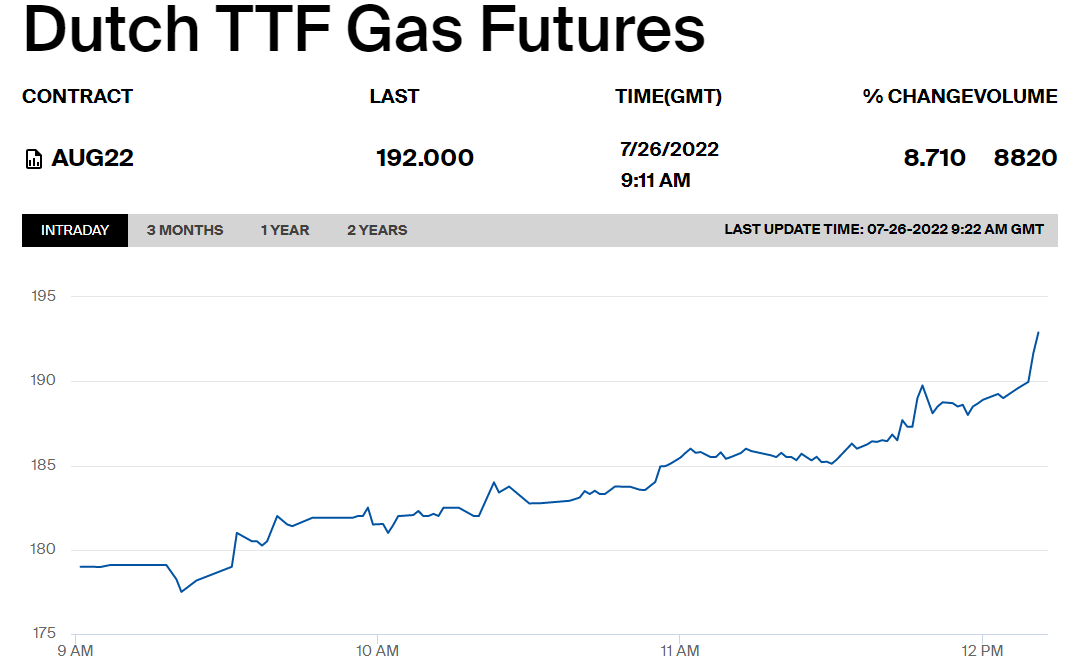 The main reason for the noticeable increase in gas prices in Europe is the new blackmail of Gazprom. The Russian company announced that starting tomorrow (July 27) it will cut gas supplies via the Nord Stream by half - to 33 mcm. Gazprom justifies its actions by the fact that another turbine has completed the period between repairs and therefore can no longer serve Portovaya CS.

Traders fear a shortage of gas on the market amid warm weather and active preparation of gas storage facilities for the heating season. So, as of July 24, European storages are filled by an average of 66.7%, and Europe stores almost 70 bcm of gas in UGS (excluding United Kingdom).

Russia's Gazprom claims it is a reliable supplier and does not use gas for political purposes. However, when supplies through Nord Stream are reduced, Gazprom does not use the Ukrainian GTS or the Yamal-Europe route to replace supplies. It should be noted that Gazprom transports less than 40% of the reserved capacity through the Ukrainian GTS.