In 11 months of 2021, more than 2 bcm of natural gas were re-exported, and for the whole time - almost 2.4 bcm. As of the beginning of December, non-residents store about 1.1 bcm of gas in Ukrainian underground storage facilities at the "customs warehouse". In November 2021, Ukraine reduced gas imports by 14 times, down to 10.7 mcm, which is the lowest value since May 2021. Compared to November 2020, imports of natural gas into Ukraine dropped even more, down by 33 times. Throughout the month, gas imports were stable - about 271 tcm per day. All gas was imported from Hungary under the virtual reverse mechanism. There were no deliveries from other directions.

During January-November 2021, Ukraine imported 2.546 bcm of natural gas, by 6.2 times less than in the same period of 2020. The decline in natural gas imports into Ukraine was due to record high prices this year. It is also the lowest volume imported in the last 6 years since gas imports from Europe began. The bulk of gas was imported from Hungary - 2.2 bcm (86% of all supplies), from Slovakia - 285 mcm (11%), and from Poland - 71 mcm (3%). 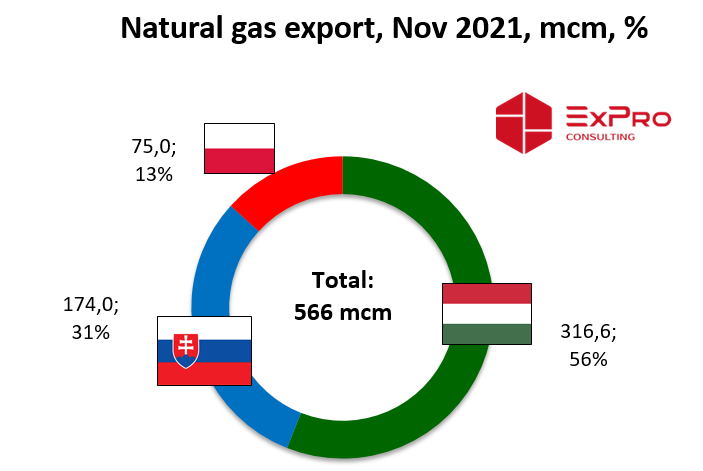