In August 2020, compared to July 2020, Ukraine increased its import of natural gas from Europe by 1.6 times, up to 3.36 bcm, which was the highest monthly level over the last 5 years, as reported by the Gas TSO of Ukraine LLC (GTSOU).

Deliveries from Hungary increased by 16%, up to 544 mcm during August 2020. All natural gas coming from Hungary is imported under the virtual reverse import mechanism.

Thus, in August 2020, for the first time in the history of Ukraine, the volume of imports under virtual reverse mechanism exceeded the volume of physical gas supplies. According to the virtual reverse, 2.06 bcm of natural gas were imported, which was 61% of all imports. Virtual imports were available in all three main Ukrainian interstate natural gas interconnection points, i.e. Slovakia (Velke Kapushany), Hungary (Bereg VIP),and Poland (Ukraine-Poland VIP).

During January-August 2020, compared to the same period last year, Ukraine increased its natural gas imports by 31%, up to 12.6 bcm, which was also record high over the last 5 years.

One may recall that during September 1-21, 2020, natural gas imports through Budince (Slovakia) will not be available due to scheduled repairs of the interconnection. Imports under virtual reverse mechanism through Velke Kapushany will not be affected and remain available. 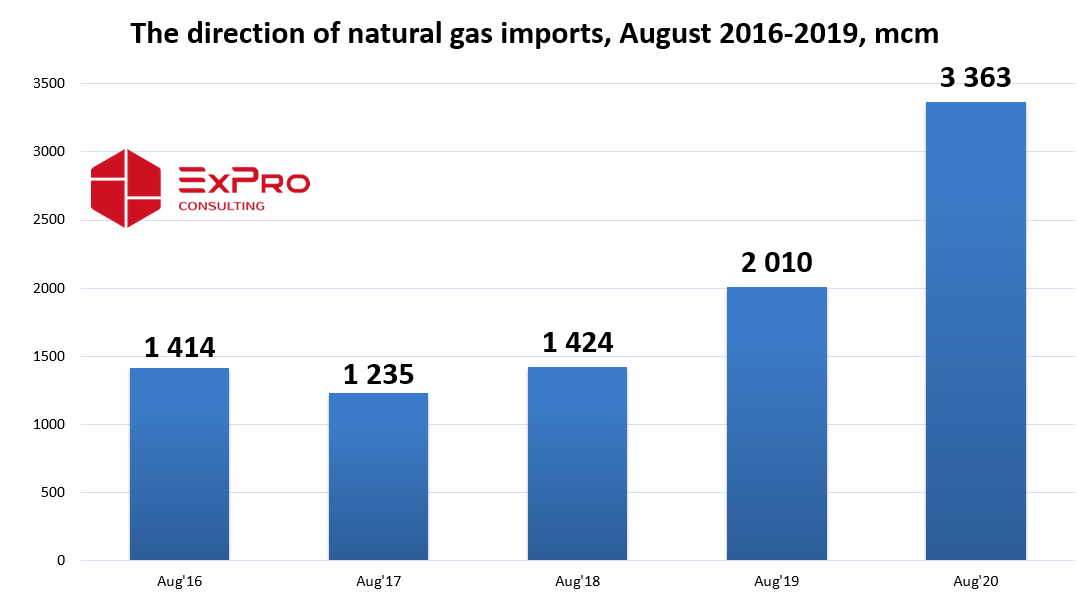 All events
News
UGV plans to build 4 wells at the Lypovetske gas field Factorial K and Naftogazmontazh will control CWO for UGV for UAH 108 million For certain purchases of drilling equipment for UGV the API certificate is no longer required Enwell Energy increased its hydrocarbon production by 8% in the first half of 2020 Another specialist from Kazakhstan joined the Naftogaz team Denimex has produced a high quality junk mill Ø115 Cadogan Petroleum reduced production by 23% in the H1 of 2020 Poltavagasvydobuvannya will conduct a 3D-seismic survey at Tymofiyivska and Kolomatska-South Kolomatska area Expert Petroleum will start operations on October 1 Natalia Rudevych headed the Oil and Gas Services in Naftogaz State Guarantees Will Provide High Localization and Cheap Credits for HPSPP’s Construction – Ukrhydroenergo For the first time in Ukraine, Ukrnafta successfully performed perforation in a horizontal wellbore Strategic directions for increasing Naftogaz’s hydrocarbon reserves have not changed DTEK Will Focus on Green Hydrogen Production Denimex, commissioned by Ukrburgaz, set a record for drilling with a single bit NEURC will postpone the introduction of the fee for zero imbalances in natural gas market for one year
More news